I was not interested in chasing Big Boy.  It was going to be too much of a spectacle and not enough working steam.  Big Boy just wasn't real unless is was working up a grade with a long string of PFE reefers.  Not to mention all the missing infrastructure from the age of steam. No, I'll take a pass.

Perhaps it was some of the spectacular images I saw on the internet of the giant steam plume that early morning at Granger.  I weakened.  I found some cheap airfares to Salt Lake.

I knew the chase east from Ogden was going to be a zoo, but I was really unprepared for the crowds because I had never seen anything like it. So my first two images were an attempt to illustrate the event, showing the crowds that chased the train and stood by  trackside to see "Big Boy".  Union Pacific must have done a great job of publicizing the event to the general public.  This was no railfan event.  Whole families lined the track, many with picnic lunches.  I followed the 4014 for two days, from Ogden to east of Evanston.

Having taken a bite of the apple, I was ready for a second.  So in late September I again headed to Salt Lake for a quick two days of chasing, again centered around Evanston.  The first day was most notable for the lack of crowds.  But the second day dawned clear and cold, and heading west from Evanston the 4014 put out vesuvian clouds of white steam.  It was a spectacular day of train chasing.

I have combined both trips into one album.  These two short trips showed that Big Boy can put on a pretty good show even as an exhibit piece with a crowd. 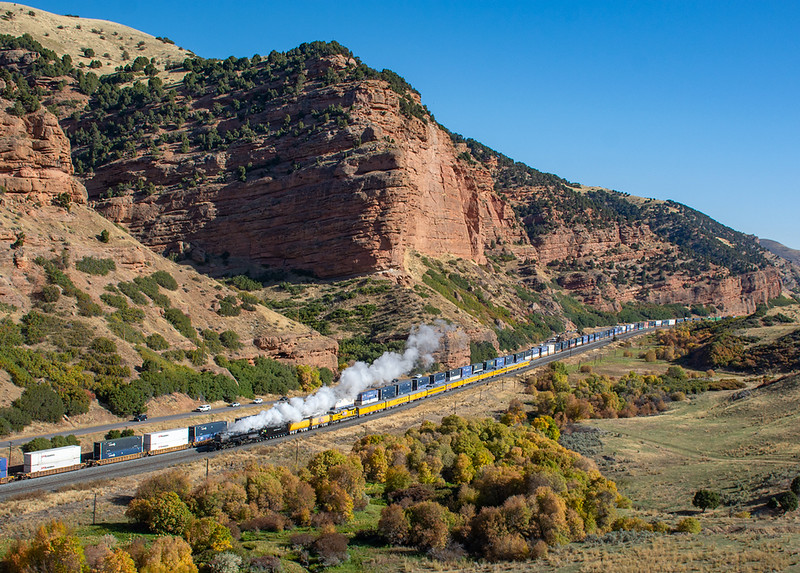